As a society we have a long way to go in terms of effectively screening for and addressing perinatal Depression, even further to go with Anxiety which is actually even more common…and buried way down the list (a topic layered with shame for a lot of mamas) is Anger and Rage. This was the emotion that I certainly struggled with the most during my transition to motherhood. Doing some reflection on the stories that I tell myself about anger and why has been crucial to my survival in this jungle we call parenthood.

Here is my Anger Story… 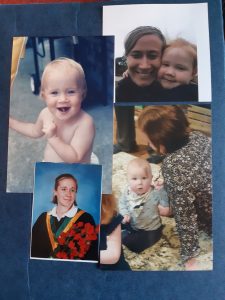 Once upon a time, anger was not allowed…but I felt it anyways.

I was a “difficult baby”

I was a child who could throw some epic tantrums

I was a “hormonal teenager” who terrorized my mother.

My mother, who just NEVER seemed to get angry, did not seem to understand why I couldn’t just sweep my BIG feelings under the rug which made me even angrier.

I excelled in school and in my extracurriculars.

But I felt that I never quite measured up at home because of my temper…infamous to this day when our family gathers and takes walks down memory lane.

My parents did their best with the tools they had (this is not a story of blame) but the mystery of my female rage really did seem to elude them throughout my time under their roof. The more I tried to bury this evil anger, the more powerful and toxic it seemed to become.

Fast forward to my transition to motherhood…I was ANGRY!

Of course I was angry!

In the early days, what was apparent was how much I had lost (sleep, freedom, control, my own physical space) and ALL that was gained was not yet fully realized.

Yet I was ashamed for feeling angry…it was modelled for me that mothers aren’t supposed to be angry.

My anger turned to my first born bub…who else could I blame? She just wouldn’t cooperate with my plans!

At its worst, I snapped at her, put her in her crib, and left the room to bawl in the fetal position, allowing her screams to fill the house. I was overcome with shame.

When this happened, it snuck up on me and I was NOT ok with it!

The greatest gift of motherhood for me (other than the muchkins of course!) has been the wake-up call that my core belief of anger being bad, wrong, and unladylike is utter bullshit and has been pretty destructive to my health and happiness in a lot of ways over the years.

My hope is that we begin to talk more openly & judgement-free about the myriad of postpartum emotional experiences that exist for women. That we begin to have a better understanding of the true experiences involved in the enormity of this transition rather than the simple airbrushed versions.

I would be honored to hear the story of your journey with anger! How was anger treated in your family or origin? How does anger sit with you now? What changes would you like to make in your relationship with anger?